IN MY experience the average lorry driver has a pornographic turn of mind. It’s all those long journeys with nothing to think about but the road. And all those long nights in the cab with nothing to do but to… So one day this geezer is driving along when he catches sight of a leggy blonde by the roadside. And, of course, his mind turns to carnal matters. He draws up beside her while in his imagination she is saying – like some cheesy line from a cheap porno movie – “do you fancy a shag?” But really he knows it’s a fantasy. Things like that just don’t happen. He’s fat and he’s bald with a hairy beergut and he smells of sweat and diesel, and this gorgeous young woman climbing into the cab right now is hardly likely to think twice about him. So she slams the door shut with a jolt, and turns to him, and says, “do you fancy a shag then?”

This is a true story. Her name is Louise and she really did give sex to lorry drivers for no other reason than that she thought it was the thing to do, and that they were nice to her.

Here’s another story. She’s sitting in a pub one day with a half a pint some bloke has bought for her. She finished that one and he offers to buy her another. “That’s all right,” she says, “you’ve already paid for your shag.” Well he must have been feeling generous because he bought her another one anyway, bouncing to the bar with an extra lightness in his step.

Well someone tried. And it didn’t make her better.

Louise has a mental health problem, in case you haven’t guessed it. She’s a certified Manic Depressive, though the label doesn’t really tell you much. But she has no control whatsoever over her mind and what it thinks. And no control over her body and what it wants. Somehow the thread by which determination and action are connected is severed in her case. In modern English: she’s lost it.

She came to this town to sleep with someone. He had black hair and startling blue eyes. She had a steady boyfriend at the time and a decent life back in Switzerland. She was well off and spoke half-a-dozen languages. But this man haunted her. And she dropped everything to come and find him. And then they were lovers for a while. And one day she’s sitting there looking preoccupied. And he says, “what are you thinking Lou?” And she goes “Brrrrrr” and screams and starts pulling out her hair. And the guy is so frightened he runs straight round to his Mother to blag some money off her so he can go away somewhere.

Later she fell for another man, a laid-back artist from the Midlands, brutally handsome in a cavemanish sort of way. She called him Gizmo. He was picking fruit in the south of France, so she went off looking for him. It took her two weeks to find him and meanwhile she slept with every lorry driver on the way. Something very strange was happening to her. She was a nice girl from a good background, but this inexplicable urge had hold of her. And meanwhile she was thinking about Jesus. And Jesus and the Devil were vying for her sanity, playing havoc with her loins. And she slept with ten lorry drivers in one day before she finally caught up with Gizmo.

They were together for three years, travelling, living in vans, scratching a living from boot-fairs and fruit picking and anything they could find. And she spent the entire time thinking he was having affairs with all the women who were naturally drawn to him. And whenever the pressure got too much she would go off and have an affair. And eventually she got pregnant, though she’d always vowed not to have a child (she was adopted herself). And then they were in some dingy dive in some obscure town and it seemed as if the whole world was bereft of love, drained of love, like a void. And there was just her and this squalling thing – Gizmo being off with his mates – and tiredness, and uncertainty, and confusion, and really, really, really, deep down, though she couldn’t admit it to herself, she didn’t want the child. She didn’t want it just as she had not been wanted. But she had to play the Mother. And did she love the child or not? And didn’t she need a break occasionally? So she’d hand the child to Gizmo and go off. “He’s your baby too, you take care of him.” And Gizmo seemed to have a secret. There was something in his eyes, a glimmer of doubt. And she felt that something was going on behind her back. And she had this feeling welling up inside of her, like doom, like terror, like ultimate loss.

Well this is the feeling as she described it to me. But other people have described how she behaved during this time. Like the day she came round to someone’s house, and she had this malicious grin on her face, and she said, “I’ve left the baby under a bush”, and then laughed. And how they all panicked, and she laughed some more as they ran round in the rain to see how the baby was, and it was just dozing happily in its cot.

The thing about Louise is that she is split. She creates splits by her very thought-processes. So she loves Jesus and purity but has an uncontrollable lust. So when something bad happens she skips around and dances singing to herself, and when she should be happy she can’t see any reason to exist. And she fears unfaithfulness and is unfaithful herself. And she loves the baby to distraction yet can’t help rejecting it. And Gizmo was worried about her, and her Mother was worried about her, and her behaviour was so bizarre they were all certain she was going mad. Didn’t eat, didn’t sleep, didn’t show love or any signs of joy. Like a wounded animal, as she describes it. And eventually they persuaded her she needed help.

So this was the beginning of her contact with the Psychiatric services.

Then Gizmo split up with her. He wanted a normal life again. Living with Louise was like being embroiled in some mad parody of a soap-opera. She took so much energy and it was ruining his life. Like a lot of people he just didn’t know what he was getting into when he started going with her. And after three years of torment and unfaithfulness and churning bitterness, he just finally realised that he couldn’t cope any more.

But the effect on Louise was devastating. Gizmo was more than just a boyfriend to her. He was an obsession. Because – despite the excursions – he was the only man ever to give her sexual satisfaction. And she felt she couldn’t live without him. And to this day she still talks about him and how she wants him back so they can be a family again. And meanwhile the child had been taken into care. She gave the baby to a complete stranger on the street and – rather than commit suicide – went off and got drunk. So it’s no wonder really. And now she has nothing left. No Gizmo. No baby. No life. 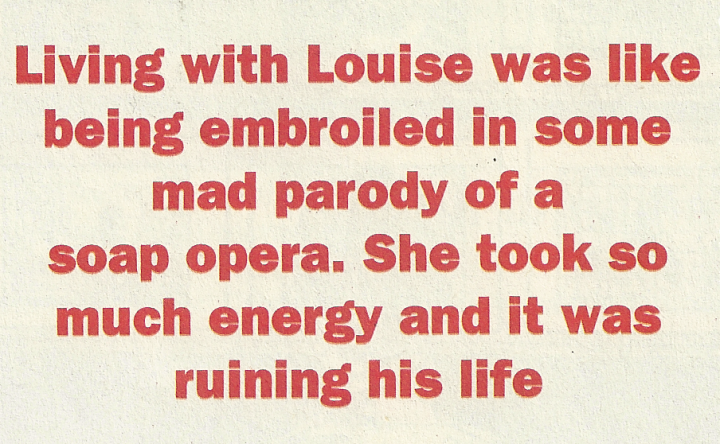 BY THE time Jamie met her she was off all that stuff. But desperately low, living in a bedsit, moody and strange. Smoking foul smelling dog-end rollies to the butt, with a dreadful hacking cough. Bereft of motivation or joy. Longing and lonely for love. Sleeping casually with anyone just for the semblance of love. Used. Scorned. Ignored by everyone she’d slagged off in the past. Laughed at. Called a slapper and a slag. Mistrusted. Utterly alone. And Jamie offered her a prawn sandwich and she looked startled.

Well Jamie’s a sucker for the rejected ones, having known rejection too in his time. And they started seeing each other. He was worried about her mental stability, but thought they could help each other. Two lonely people on a journey to love. And bit by bit she seemed to be getting better. Was even happy for a time. He made her laugh. Gave her warmth and toe-curling sensuality and time off from her madness. People warned him about her. They said, “she’s not good enough for you, she’s evil.” But he persisted, drawn by the hidden glamour and a Siren mind. And one Saturday night they were in a Restaurant and she was wearing a backless dress and smoking elegant filter cigarettes and talking in a sophisticated way about her life, and he thought: “Yes, yes, yes! This is what it’s all been for.”

That was a while ago. A few days later he went round to see her and she was still in bed. She’d been in bed for two days. She’d had a letter from the Social Services saying that they were putting the child up for adoption. She said she couldn’t walk. She said, “haven’t you brought someone with you?” He said, “like who?” “Like Gizmo,” she said, “I want to see his beautiful face.” And then she got up and she was shuffling from foot to foot, with her shoulders drooped and her head hung like a rag doll, not looking him in the eye. And she said, “you did this to me.” “How?” “By having sex with me.” And she threatened to jump from the balcony. And she’s told everyone it was Jamie that did this to her. And now she’s back on the drugs again.

And what Jamie says is: did Social Services think before they sent that letter? Did they even imagine what it would do to her? And he thinks, thanks a lot. Nice work. You’ve just taken away my sophisticated beauty and replaced her with a mad rag doll.