People who achieved so much in their short lives 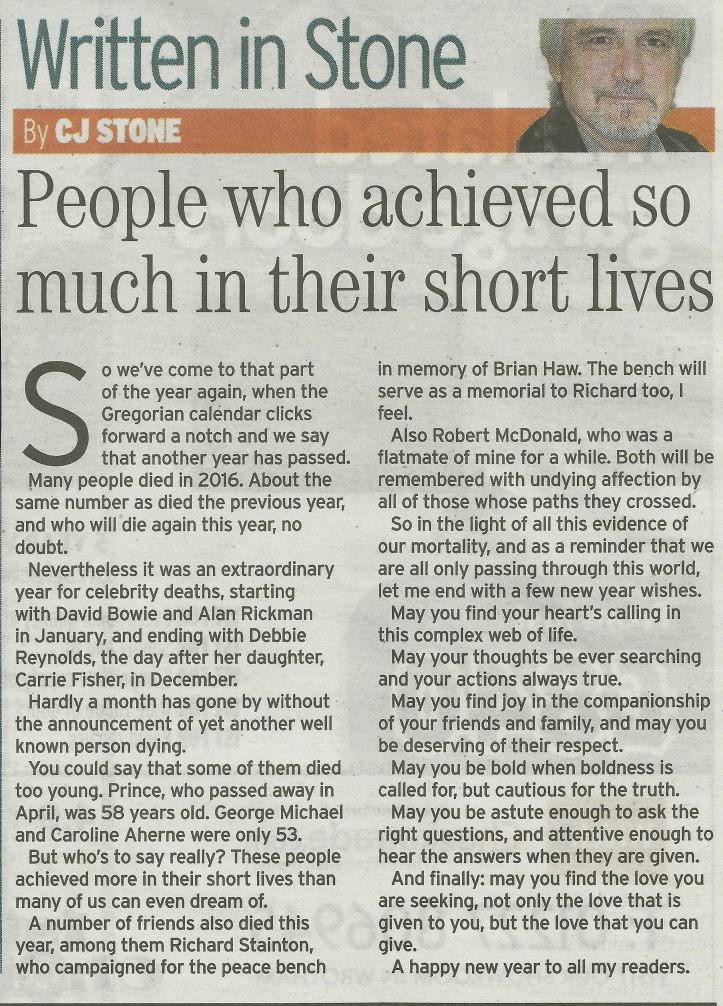 So we’ve come to that part of the year again, when the Gregorian calendar clicks forward a notch and we say that another year has passed.

Many people died in 2016. About the same number as died the previous year, and who will die again this year no doubt.

Nevertheless it was an extraordinary year for celebrity deaths, starting with David Bowie and Alan Rickman in January, and ending with Debbie Reynolds, the day after her daughter, Carrie Fisher, in December.

Hardly a month has gone by without the announcement of yet another well-known person dying.

You could say that some of them died too young. Prince, who passed away in April, was 58 years old. George Michael and Caroline Aherne were only 53.

But who’s to say really? These people achieved more in their short lives than many of us can even dream of.

A number of friends also died this year, amongst them Richard Stainton, who campaigned for the peace bench in memory of Brian Haw. The bench will serve as a memorial to Richard too I feel.

Also Robert McDonald, who was a flat mate of mine for a while. Both will be remembered with undying affection by all of those whose paths they crossed.

So in the light of all this evidence of our mortality, and as a reminder that we are all only passing through this world, let me end with a few new year wishes.

May you find your heart’s calling in this complex web of life.

May your thoughts be ever searching and your actions always true.

May you find joy in the companionship of your friends and family, and may you be deserving of their respect.

May you be bold when boldness is called for, but cautious for the truth.

May you be astute enough to ask the right questions, and attentive enough to hear the answers when they are given.

A happy new year to all my readers.