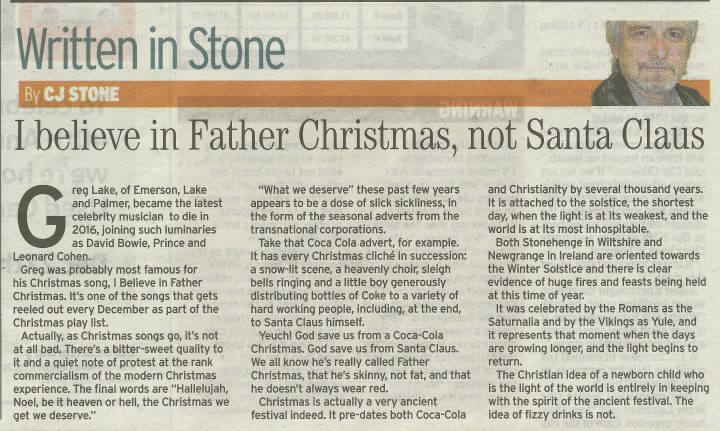 Greg Lake, of Emerson, Lake and Palmer, became the latest celebrity musician to die in 2016, joining such luminaries as David Bowie, Prince and Leonard Cohen.

Greg was probably most famous for his Christmas song, I Believe in Father Christmas. It’s one of the songs that gets reeled out every December as part of the Christmas play list.

Actually, as Christmas songs go, it’s not at all bad. There’s a bitter-sweet quality to it and a quiet note of protest at the rank commercialism of the modern Christmas experience. The final words are “Hallelujah, Noel, be it heaven or hell, the Christmas we get we deserve.”

“What we deserve” these past few years appears to be a dose of slick sickliness, in the form of the seasonal adverts from the transnational corporations.

Take that Coca Cola advert, for example. It has every Christmas cliché in succession: a snow-lit scene, a heavenly choir, sleigh bells ringing, and a little boy generously distributing bottles of Coke to a variety of hard working people, including, at the end, to Santa Claus himself.

Christmas is actually a very ancient festival indeed. It pre-dates both Coca-Cola and Christianity by several thousand years. It is attached to the solstice, the shortest day, when the light is at its weakest, and the world is at its most inhospitable.

Both Stonehenge in Wiltshire and Newgrange in Ireland are oriented towards the Winter Solstice, and there is clear evidence of huge fires and feasts being held at this time of year.

It was celebrated by the Romans as the Saturnalia, and by the Vikings as Yule, and it represents that moment when the days are growing longer, and the light begins to return.

The Christian idea of a new born child who is the light of the world is entirely in keeping with the spirit of the ancient festival. The idea of fizzy drinks is not.

The spirit of Old Christmas lives on