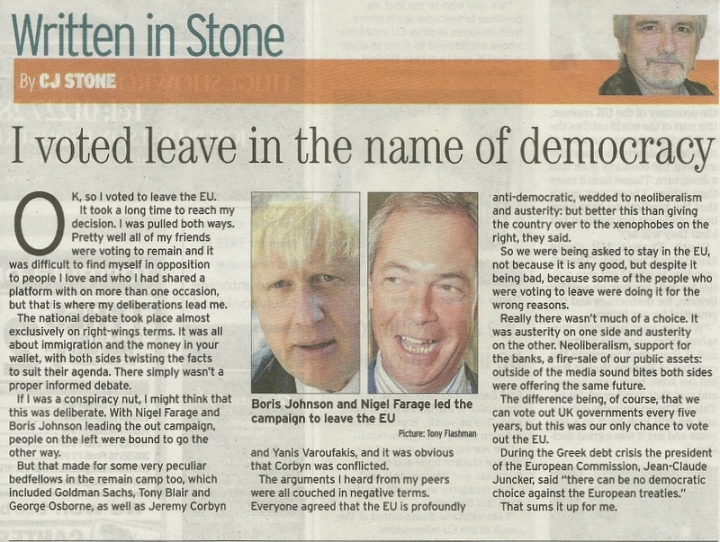 OK, so I voted to leave the EU.

It took a long time to reach my decision. I was pulled both ways. Pretty well all of my friends were voting to remain and it was difficult to find myself in opposition to people I love and who I had shared a platform with on more than one occasion, but that is where my deliberations lead me.

The national debate took place almost exclusively on right-wing terms. It was all about immigration and the money in your wallet, with both sides twisting the facts to suit their agenda. There simply wasn’t a proper informed debate.

If I was was a conspiracy nut, I might think that this was deliberate. With Nigel Farage and Boris Johnson leading the out campaign, people on the left were bound to go the other way.

But that made for some very peculiar bedfellows in the remain camp too, which included Goldman Sachs, Tony Blair and George Osborne, as well as Jeremy Corbyn and Yanis Varoufakis, and it was obvious that Corbyn was conflicted.

The arguments I heard from my peers were all couched in negative terms. Everyone agreed that the EU is profoundly anti-democratic, wedded to neoliberalism and austerity: but better this than giving the country over to the xenophobes on the right, they said.

So we were being asked to stay in the EU, not because it is any good, but despite it being bad, because some of the people who were voting to leave were doing it for the wrong reasons.

Really there wasn’t much of a choice. It was austerity on one side and austerity on the other. Neoliberalism, support for the banks, a fire-sale of our public assets: outside of the media sound bites both sides were offering the same future.

The difference being, of course, that we can vote out UK governments every five years, but this was our only chance to vote out the EU.

During the Greek debt crisis the president of the European Commission, Jean-Claude Juncker, said “there can be no democratic choice against the European treaties.”

That sums it up for me.

6 thoughts on “I voted leave in the name of democracy”