Is Blair beginning to feel the heat over Iraq? 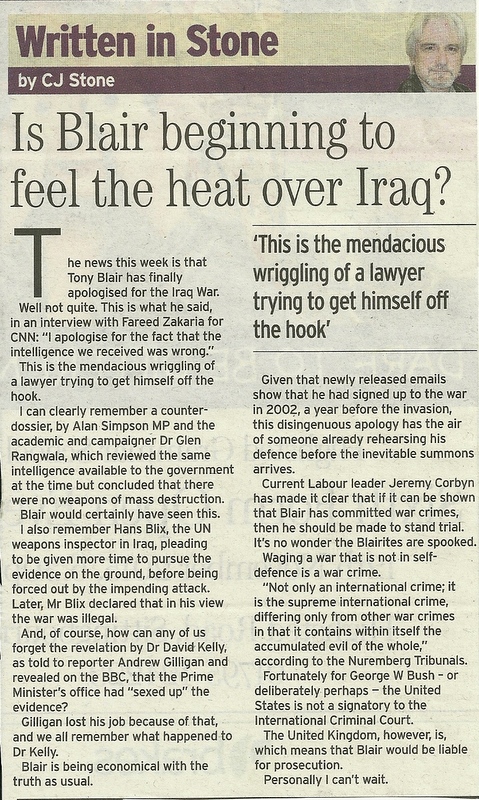 The news this week is that Tony Blair has finally apologised for the Iraq War.

Well not quite. This is what he said, in an interview with Fareed Zakaria for CNN: “I apologise for the fact that the intelligence we received was wrong.”

This is the mendacious wriggling of a lawyer trying to get himself off the hook.

I can clearly remember a counter-dossier, by Alan Simpson MP and the academic and campaigner Dr Glen Rangwala, which reviewed the same intelligence available to the government at the time but concluded that there were no WMDs.

Blair would certainly have seen this.

I also remember Hans Blix, the UN weapons inspector in Iraq, pleading to be given more time to pursue the evidence on the ground, before being forced out by the impending attack. Later Mr Blix declared that in his view the war was illegal.

And, of course, how can any of us forget the revelation by Dr David Kelly, as told to Andrew Gilligan and revealed on the BBC, that the Prime Minister’s office had “sexed-up” the evidence?

Gilligan lost his job because of that, and we all remember what happened to Dr Kelly.

Blair is being “economical with the truth” as usual.

Given that newly released emails show that he had signed up to the war in 2002, a year before the invasion, this disingenuous apology has the air of someone already rehearsing his defence before the inevitable summons arrives.

Current Labour leader Jeremy Corbyn has made it clear that, if it can be shown that Blair has committed war crimes, then he should be made to stand trial. It’s no wonder the Blairites are spooked.

Waging a war that is not in self-defence is a war crime.

Fortunately for George W. Bush – or deliberately perhaps—the United States is not a signatory to the International Criminal Court.

The United Kingdom, however, is, which means that Blair would be liable to prosecution.