Is this the world we want to leave our children? 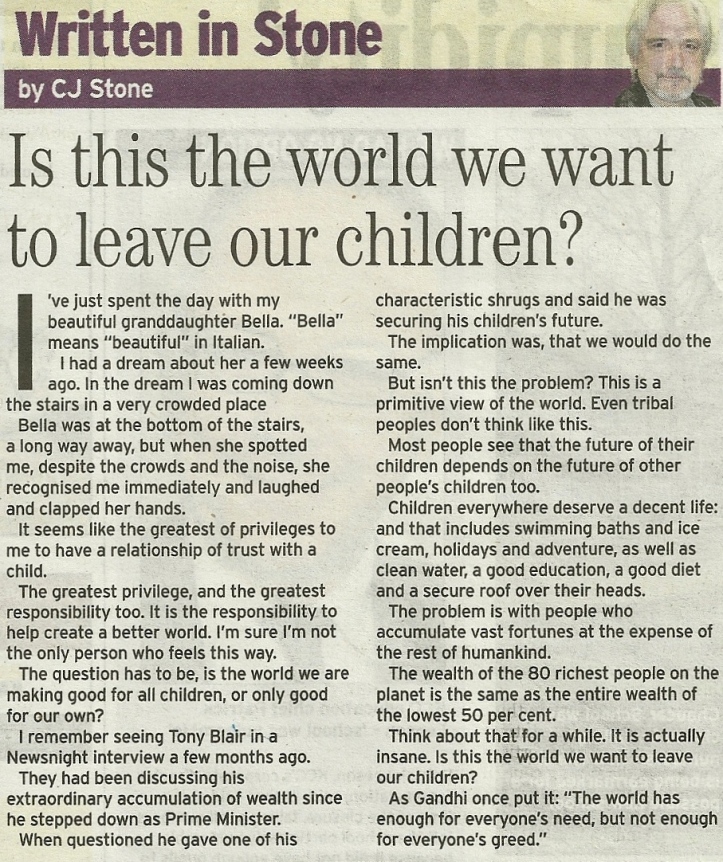 I had a dream about her a few weeks ago. In the dream I was coming down the stairs in a very crowded place.

Bella was at the bottom of the stairs, a long way away, but when she spotted me, despite the crowds and the noise, she recognised me immediately and laughed and clapped her hands.

It seems like the greatest of privileges to me to have a relationship of trust with a child.

The question has to be, is the world we are making good for all children, or only good for our own?

I remember seeing Tony Blair in a Newsnight interview a few months ago.

They had been discussing his extraordinary accumulation of wealth since he stepped down as Prime Minister.

When questioned he gave one of his characteristic shrugs and said he was securing his children’s future.

The implication was, that we would do the same.

But isn’t this the problem? This is a primitive view of the world. Even tribal peoples don’t think like this.

Children everywhere deserve a decent life: and that includes swimming baths and ice cream, holidays and adventure, as well as clean water, a good education, a good diet and a secure roof over their heads.

The problem is with people who accumulate vast fortunes at the expense of the rest of humankind.

Think about that for a while. It is actually insane. Is this the world we want to leave our children?

From The Whitstable Gazette.