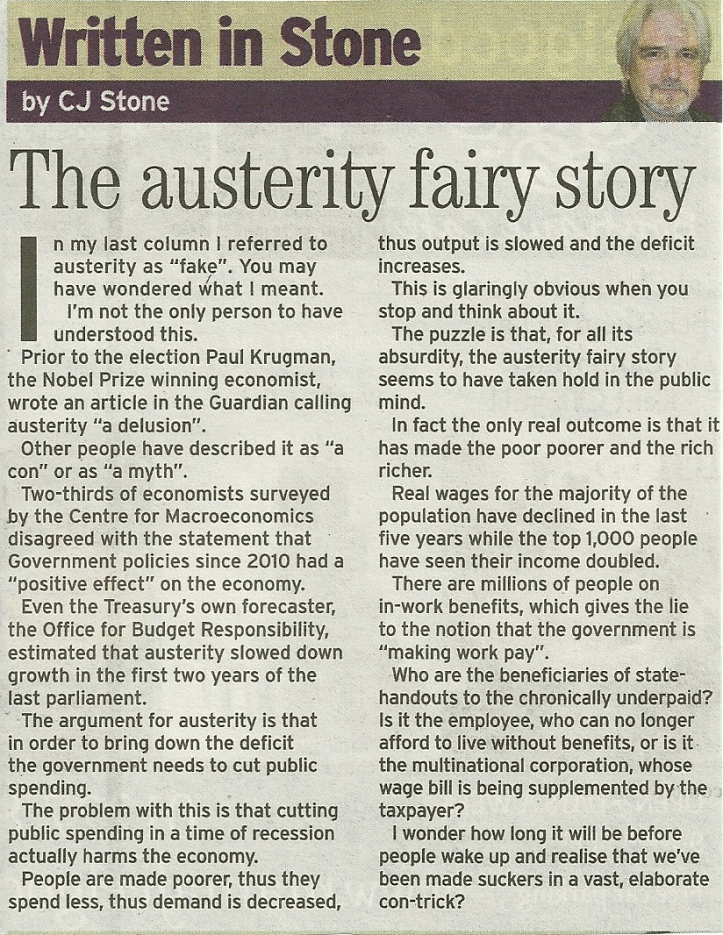 In my last column I referred to austerity as “fake”. You may have wondered what I meant.

I’m not the only person to have understood this. Prior to the election Paul Krugman, the Nobel Prize winning economist, wrote an article in the Guardian calling austerity “a delusion”. Other people have described it as “a con” or as “a myth”.

Two thirds of economists surveyed by the Centre for Macroeconomics disagreed with the statement that Government policies since 2010 had a “positive effect” on the economy.

Even the Treasury’s own forecaster, the Office for Budget Responsibility, estimated that austerity slowed down growth in the first two years of the last parliament.

The argument for austerity is that in order to bring down the deficit the government needs to cut public spending.

The problem with this is that cutting public spending in a time of recession actually harms the economy. People are made poorer, thus they spend less, thus demand is decreased, thus output is slowed and the deficit increases.

This is glaringly obvious when you stop and think about it. The puzzle is that, for all its absurdity, the austerity fairy-story seems to have taken hold in the public mind.

In fact the only real outcome is that it has made the poor poorer and the rich richer.

Real wages for the majority of the population have declined in the last five years while the top 1,000 people have seen their income doubled.

London has become a playground for billionaires while ordinary people are being cleansed from the capital.

There are millions of people on in-work benefits, which gives the lie to the notion that the government is “making work pay”.

Who are the beneficiaries of state-handouts to the chronically underpaid? Is it the employee, who can no longer afford to live without benefits, or is it the multi-national corporation, whose wage-bill is being supplemented by the taxpayer?

The Tories won the election with 24.4% of the eligible vote.

I wonder how long it will be before people wake up and realise that we’ve been made suckers in a vast, elaborate con-trick?