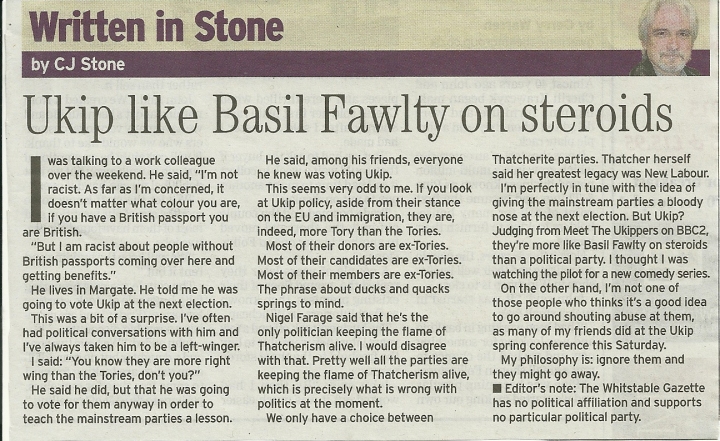 I was talking to a work colleague over the weekend. He said, “I’m not racist. As far as I’m concerned, it doesn’t matter what colour you are, if you have a British passport you are British. But I am racist about people without British passports coming over here and getting benefits.”

He lives in Margate. He told me he was going to vote Ukip at the next election.

This was a bit of a surprise. I’ve often had political conversations with him and I’ve always taken him to be a left-winger.

I said, “you know they are more right wing than the Tories, don’t you?”

He said he did, but that he was going to vote for them anyway in order to teach the mainstream parties a lesson. He said that, amongst his friends, everyone he knew was voting Ukip.

This seemed very odd to me. If you look at Ukip policy, aside from their stance on the EU and immigration, they are, indeed, more Tory than the Tories.

We only have a choice between Thatcherite parties. Thatcher herself said that her greatest legacy was New Labour.

I’m perfectly in tune with the idea of giving the mainstream parties a bloody nose at the next election. But Ukip? Judging from Meet The Ukippers, on BBC2, they’re more like the cast of Fawlty Towers on steroids than a political party.

I thought I was watching the pilot for a new comedy series.

On the other hand, I’m not one of those people who thinks it’s a good idea to go around shouting abuse at them, as many of my friends did at the Ukip spring conference this Saturday. They love being shouted at. It makes them feel important.

They’re like the embarrassing, drunken uncle at a wedding. The more you pay attention to them, the more you encourage them. Best to ignore them and hope they go away.