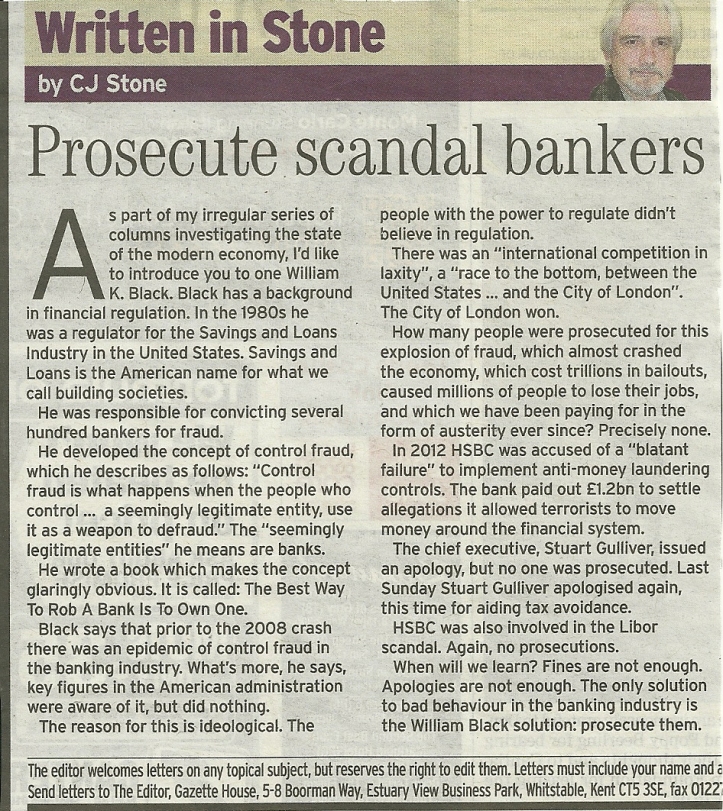 As part of my irregular series of columns investigating the state of the modern economy, I’d like to introduce you to one William K. Black. Black has a background in financial regulation. In the 1980s he was a regulator for the Savings & Loans Industry in the United States. “Savings and Loan” is the American name for what we call Building Societies.

He was responsible for convicting several hundred bankers for fraud.

He wrote a book which makes the concept glaringly obvious. It is called: The Best Way To Rob A Bank Is To Own One.

Black says that prior to the 2008 crash there was an epidemic of control fraud in the banking industry. What’s more, he says, key figures in the American administration were aware of it, but did nothing.

The reason for this is ideological. The people with the power to regulate didn’t believe in regulation. There was an “international competition in laxity”, a “race to the bottom, between the United States… and the City of London.” The City of London won.

How many people were prosecuted for this explosion of fraud, which almost crashed the economy, which cost trillions in bailouts, caused millions of people to lose their jobs, and which we have been paying for in the form of austerity ever since? Precisely none.

In 2012 HSBC was accused of a “blatant failure” to implement anti-money laundering controls. The bank paid out £1.2bn to settle allegations it allowed terrorists to move money around the financial system.

The chief executive, Stuart Gulliver, issued an apology, but no one was prosecuted. Last Sunday Stuart Gulliver apologised again, this time for aiding tax avoidance.

HSBC was also involved in the Libor scandal. Again, no prosecutions.